As I mentioned in my previous post, Claire and I had to come to the rescue of a couple of animals lately. Bruce was the second, and I hate to drone on about our pets (the only things worse than pet blogs are mommy blogs), but Bruce has a unique story. When our friends and family learned we had taken in another cat, they rolled their eyes. When they heard why, everyone understood.

So this is the story of our latest addition.

A little while ago, Claire was outside when she heard a meow behind her.

And this is who she found: 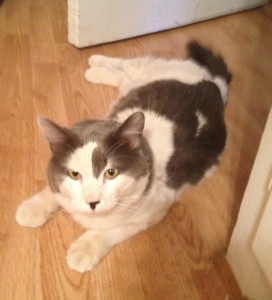 We decided to call him Bruce, mostly because it was a name that we wouldn’t use for future pets.

It turns out, Bruce is a Maine coon, a breed of cat that I didn’t think existed (and, if we’re being honest, didn’t care existed). He chirps a lot (sometimes because he wants to play or wants food, sometimes just to announce he’s entering the room), he’s gigantic, and, as is described in the aforementioned site, he’s “a big loveable goof.” 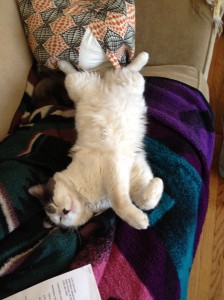 We tried to find him a good home and as soon as Claire posted a description on Facebook, we were hit with electronic mail. Claire did most of the corresponding, told me about the prospects, and together we decided on a family that had a couple of young kids (who we figured to play with Bruce and utilize his friendliness and boundless energy).

Unfortunately, when the new owners came to pick up Bruce, I was judging a high school journalism competition about an hour north of Lubbock. I wished I could have said goodbye, but Claire got a good vibe from the new owners (they knew how to handle a scared cat) and ultimately I was just happy he found a new home.

Smash cut to four days later. It’s Sunday night, Claire is helping out at an event for her job, and I’m at home marveling at the fact that there’s actually an inch of snow on the ground. Check it out: I took this in the late morning, and it continued to snow like that almost the entire day. 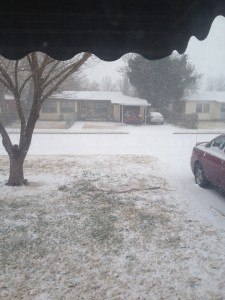 On the rare occasions that it snows in Lubbock, the accumulation is almost never more than an inch and it’s normally melted by noon. But this snow was sticking around – so much so that I was already hoping a snow day was in order. That was when I heard a meow at the door.

At first I thought it was Stripey McPeppermint hungry for some free food. But when I opened the door, there was Bruce, standing on his back legs peering in the screen door window. He genuinely looked surprised to see me. I yelled his name in joy, and I laughed and laughed. I mean, I had seen The Incredible Journey / Homeward Bound many times, but didn’t think it would happen in real life. Brucey had found his way back!

I texted Claire to share the exciting news. She was not happy. In fact, she was absolutely furious.

As it turns out, the family lived clear on the other side of town – there was no way he could have found us. A quick trip outside (while Bruce devoured his food) revealed the ugly truth: The family, for whatever reason, had dropped him off on our street. Not at our house. On our street. Like I said, there was still snow on the ground, and you could see his paw prints where he had clearly gone from door to door, meowing desperately to be let in. I’m just glad I was there to answer.

Fortunately, Claire no longer had the contact information for the people who had temporarily taken him in, because we were absolutely livid. We told them that if it didn’t work out to bring him back to us and it wouldn’t be a problem. Clearly they remembered where we lived (who the hell would only remember that we lived somewhere adjacent to the Elgin/47th St. intersection.

After that, we tried to track down those people, but were unsuccessful (definitely best for them). Claire did put an ad up on Craigslist warning people about adopting pets, but I think it was more in the hopes that they would be pissed off enough to try and contact us (giving me a chance to deliver my well-rehearsed rant). I had to settle for reminding my students that how people treat animals is a great indicator of character (see also: How people treat wait staff, The pride people take in seemingly menial tasks).

We tried Craigslist again, but this time the only people who responded were a college student (who didn’t seem to understand that owning a cat wasn’t as much responsibility as owning a dog but it still requires a little effort) and a couple who was flakier than Tony the Tiger’s dandruff. HEY-OOOO!

Honestly, it’s definitely possible that we were being picky and that was turning off potential owners. But can you blame us? The last owners abandoned Bruce in the snow! He deserved better.

So now, we have Bruce (we made his full name a Braveheart reference to coolify “Bruce”). He loves be near us, whether it’s laying on the kitchen floor or sleeping on the couch. He loves to play with cat toys and can entertain himself pretty well. He was scared of dogs for awhile (he used to growl when he would hear a dog bark…on the TV) but feels safe now. He can flatten himself quickly and squeezes into places that are way too small for him. He’s very strong but prefers licking to biting. Really his only flaw is wanting to play with Clementine (who does not want to play with Bruce). And for awhile it was that he licked us until we woke up in the middle of the night to pet him, but it’s hard to begrudge him that.

He’s a large cat, and I hate to think of him on the streets, slowly morphing into a feral tomcat who is terrified of people and constantly hungry. Best case scenario: He lives for 6-7 years, dodging animal control, fighting hunger and heat, and protecting a dry spot he calls home during the rare rain.

But that’s not what happened. He found us, and then he found us again. Now he’s free to be a big, lovable goof.