March Madness is second only to college football season in my book. Lebron James is the only reason to watch the NBA, I never got into the NFL, and baseball…well, it’s baseball. I always make sure to watch the entire tournament, especially those first four days. This year, I’ll be in Columbus, sitting at a bar with my friends for hours on end, drinking and watching great game after great game.

But we’re not there yet. It’s still the last week of regular-season play. Then it’s the pointless conference tournaments (seriously, why?) and finally March Madness officially arrives.

Well, I hate to keep dwelling on this, but the anti-BCS crowd drones non-stop for the entire college football season (and smugly gloats during the NFL playoffs). It’s only fair that I keep defending my side. The college basketball regular season is a painful reminder of what could easily happen to college football if the pro-playoff pundits have their way.

The college football season, start to finish, is arguably the most entertaining season in sports. College basketball…not so much. March Madness is incredible event, but it lasts only a month (and, by the time the Elite Eight rolls around, there are rarely any real upsets left). Because of the 64-team playoff, the regular season has virtually no meaning.

Two weeks ago, there was a prime-time matchup: Villanova v. Syracuse. It was supposed to be a hell of a game–two top teams from their conference, ranked number 8 and number 4, respectively at the time. And I literally couldn’t care less. See Fig. 1. 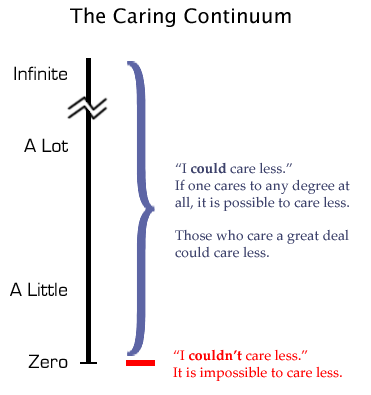 Why? Because it doesn’t matter. Not even a little bit. For the best example, check out Duke.

Duke has always been a team I respect (growing up I thought Bobby Hurley was incredible), but this year they represent what is wrong with the college basketball system.

Duke was ranked #4 a week ago when they played Maryland (#22). In a thrilling game (at least that’s what they said on SportsCenter), Maryland squeaked out a win. Now, in college football, Duke plummets and can only dream about what would have happened if they had beaten the Terrapins. In college basketball…not so much.

Think about that. A loss in the final week of conference play and a loss doesn’t even drop them out of a #1 seed. When people say the college basketball regular season is meaningless, they really meant it.

Let’s hope the fans don’t trade months of incredible drama for a couple of upsets in a four-week tournament.

It seems everyone has a list of Best Picture snubs, especially around this time of year. Well, “everyone’ includes me, and so here is my list.

But first, a couple of clarifications:

First off, this list does not include movies that were not nominated. There have been countless injustices for Best Picture nominations (Babe and Apollo 13 nominated over The Usual Suspects???), but if I start listing movies never nominated the possibilities become TOO endless. Plus, I’m working on that list for a later entry.

Secondly, each movie needs a replacement from the list of those nominated for Best Picture—we just can’t say a particular year didn’t have a Best Picture that year. A Beautiful Mind was a lame-ass choice for Best Picture, but 2001 was a horrible year for movies. What would you have rather selected? Gosford Park? In The Bedroom? Not every year is going to be of 1939, 1976, 2005, or 2007 caliber.

And lastly, the disparity between the actual winner and the deserved winner must be significant enough to warrant attention. I think Shane is better than From Here to Eternity, but not enough to warrant making an issue out of it.

AROUND THE WORLD IN 80 DAYS

I get it. It’s an epic film and it practically invented the concept of the cameo (“Wait a minute…that was Frank Sinatra. But he wasn’t listed as a star in this film!”).

But the film wasn’t that good. It was bloated, repetitious, and a bit racist. However, the real crime is that this film won…against Giant, The King and I, and The Ten Commandments. It’s like Sesame Street’s “One of these things just doesn’t belong here.” No real preference for me—I’ll take the field over 80 Days.

I get it. The Deer Hunter won the year before and you didn’t want back-to-back Vietnam movies winning Best Picture. You have the star power of Meryl Streep and Dustin Hoffman in an American Beauty parallel (some have said this is film was a continuation of The Graduate if Benjamin and Elaine had gotten married). Why wouldn’t this film win?

Two words: Apocalypse Now. Even the backstory is compelling—the monumental effort to bring the film to the screen (documented in the wonderful Heart of Darkness documentary) that included budget issues, a typhoon, and Martin Sheen having a heart attack.  But forget all that – the movie itself is a masterpiece and anyone thinking this is a movie about Vietnam is sadly misinformed.

I get it. Following the personal struggles of two runners (one Jew, one Gentile), culminating in a single event to determine the winner…that’s based on a real story? That’s a guaranteed Oscar, as evidenced by its Oscar.

That said…Chariots of Fire: classic song…and that’s about it. It’s not even one of the top five sports movies ever made (none of which won Best Picture), let alone the best picture of the year. That honor, in 1981, should have gone to Raiders of the Lost Ark. Tell you what—instead of me doing all the work, why don’t you tell me why this shouldn’t have won. Oh, and you cannot hold the genre against it. Give up? Yeah, that’s probably a good idea.

A great action-adventure movie is like a great comedy—overlooked, derided, and incredibly rare. What was the last good action-adventure movie you saw? (if you even think Transformers 2 then you are no longer allowed to read this blog. Seriously.) Raiders of the Lost Ark was an absolute masterpiece, a relentless, thoughtful adventure that has never been equaled. Roger Ebert wrote this review of Raiders and, if it doesn’t sell you on the film’s greatness, nothing will.

I get it. Solid performances and a script laden with Shakespeare references. I mean, come on—it’s Shakespeare writing Romeo and Juliet WHILE HE’S LIVING IT! BOOM! Consider your mind blown.

Yeah, watch this one again sometime. Seriously. And while you’re watching, put a little Post-It® note on the TV so you can occasionally look over and be reminded that this was selected as the best movie of 1998. For added fun, count the number of times you say to yourself out loud, “Really?” My average is 17.

Saving Private Ryan was released in the summer, but that shouldn’t be held against it. Ryan is the Best Picture of 1998, and the only movie that was even close was Thin Red Line (slow but underrated). The first 20 minutes of Ryan are undisputed genius, the closest thing to wartime captured in the cinema (<sarcasm>except, of course, the gritty war epic The Green Berets</sarcasm>). The fact that the rest of the movie is pretty damn good (carried by wonderful casting) after the soldiers stormed the beach is nothing short of amazing.

I get it. Cutting edge special effects (“Wait a minute…Forrest Gump never met the President!”), a heartwarming story, and an underrated performance by Tom Hanks (paving the way for actors to “never go full-retard”) combined to form a genuinely enjoyable movie.

The Best Picture award is not about an enjoyable movie—otherwise, Back to the Future would have swept the Oscars. Being Best Picture is about greatness, and there are few films (if any) greater than The Shawshank Redemption. There’s no way that Gump should have beaten Andy and the gang. None whatsoever. Shawshank is a gripping, powerful film about friendship, hope, and determination. Gump is a two-hour tribute to the self-importance of the Baby Boomer generation.

Notice how each one of these entries has a suggestion as to why a particular film could have feasibly been chosen? I would on this entry, but I have absolutely no idea what in the holy hell the Academy was thinking on this one. For reals.

Call me naïve, but the Best Picture should be something looked back upon as a timeless classic, something we can watch decades later and have it still move us,, affect us, or at least tell us something about that time period. I love Ridley Scott (literally!), but Gladiator was an above-average action film that never tried to be anything more. For gods sake, Scott actually forgot about the dog (named “Hell”) when he released the movie and had to throw him into some dvd alternate ending. For reals. The movie drags on for 30 minutes too long, the special effects are laughable (remember the tigers?), and the ending is preposterous (A slave fights the emperor in the Coliseum…TO THE DEATH!).

So what nominees instead? Traffic? Sure, that would have been better (almost anything would), but it never achieved its own lofty aspirations. Chocolat? Really? Erin Brockovich? Two hours of Julia Roberts playing a slightly louder version of every character she’s ever played? Sign me up!

No, the rightful winner of 2000 was a foreign film by the name of Crouching Tiger, Hidden Dragon. This is a film of unspeakable beauty and whose sweet, understated storylines (and acting) were astoundingly effective. In a year of boring and bland (did you see the list of nominees?), Crouching Tiger was something radically different. Characters were flying, balancing on trees, and sky-fighting somewhere other than the matrix. And, because of the film’s sincerity and intentions, people invested themselves in it. I watched this in a movie theater in Columbus and, apart from occasional (appropriate) laughter, the audience was absolutely mesmerized. And rightfully so.

Crash (2005): Over Brokeback Mountain? News flash: When you have a story where every plotline revolves around race, it’s just as bad as a movie that ignores race completely.

The Departed (2006): Over Letters from Iwo Jima? Were you that afraid Martin would never direct another movie? The Departed is a well-done film, but if we’re handing out Best Pictures then Heat and Collateral should be up in arms over this.

Ordinary People (1980): Over Raging Bull? This one doesn’t bother me as much as it bothers other people, but they definitely have a point.

My Fair Lady (1964): Over Dr. Strangelove? I realize the Academy would never risk selecting Kubrick’s masterpiece when a safer film was available, but this is probably the most vanilla victory ever.