Yes, I will continue to analyze this movie because it is absolute genius. And yes, this entry is designed for people who have seen this movie before–spoilers galore.

As I said, I have analyzed this movie before, and I have written pages and pages on The Descent. But I cannot stop until I solve the mystery. Again, enough cannot be said about this film. Nothing is wasted in this film – every line of dialogue has a purpose and every shot is necessary. The characters themselves are rich and this is one of the very few films to feature a nearly all-female cast (typically the closest thing Hollywood comes to an all-female cast is The Women). Let’s say, for the sake of argument, that for a character to count, (s)he has to speak at least three lines of dialogue. By that definition, this cast is comprised solely of women. But can you think of any others? By that same definition, an all-male cast is relatively easy to find: The Dirty Dozen, The Great Escape, First Blood, Patton, Shawshank Redemption… That’s just one of the many things that makes this film so unique.

After the bitchin’ car wreck, Sarah wakes up in the hospital, attached to a variety of machines. She pulls the sensors off of herself and the camera focuses on the heart monitor, which reads as a flatline (naturally, since she removed the indicators). Then things get really interesting. Sarah walks out into the deserted hallway and turns around in time to see the lights turning off, slowly overtaking her as she runs away. Darkness, as we will see, plays a key role throughout the movie.

I think you can make a decent argument that Sarah never actually leaves the hospital room. She remains in a coma and the crawlers slowly kill off her friends (which represent part of her psyche) until none remain and she dies right there.

Her friends could easily represent her psyche–just look at the roster:

Holly – Sexuality (could easily be adventure as well)

But, to me anyway, the idea that it was all in her head feels like a cop-out of a movie–while we’re making it “all just a dream,” why don’t we hit on all the cliches and give some character amnesia. Brilliant!

No, The Descent deserves better than that.

I believe that Sarah did leave the hospital room and, a year later, she was reunited with her friends. Then, during a caving expedition, they were trapped, she slowly went insane, and savagely murdered everyone in the group.

As any good horror movie would do, this is hinted at in the dialogue. Early on, Rebecca warns that down in the caves, “you can get dehydration, disorientation, claustrophobia, panic attacks, paranoia, hallucinations, visual and aural deterioration.” When Sarah first sees a crawler, Juno is frantic in trying to convince that it’s Sarah’s eyes that are playing tricks on her.

Furthermore, watch Juno whenever she sees Sarah near the end of the film – Juno is clearly terrified.

The most damning piece of evidence occurs at precisely 1 hour 20 minutes into the movie. Sarah has just been born again hard, emerging from the pool of blood and ramming a horn into a lady crawler’s head before braining another crawler with a gigantic bone. Victorious, she stands on a rock with her torch in hand, takes a deep breath, and screams as loudly as she can. The film then cuts to Juno, Sam, and Rebecca who are startled by the scream. However, this is where it gets nuts. The scream is NOT Sarah’s, at least not the one they hear. The scream is continuous, but as soon as the shot cuts from Sarah to the remaining members of the group, it changes into the screech of the crawlers.

In case you couldn’t follow that, here’s the video clip:

So, if I’m correct, the group is trapped by a cave-in, which pushes Sarah over the edge. Driven mad by the situation, by the darkness (which the girls warned about), and the death of her family, Sarah kills her friends before settling down to die underground (either by her own hand or by the elements over time).

This is where the faces come into play. Remember talking about the faces? They’re everywhere in the movie. Some are obvious examples: 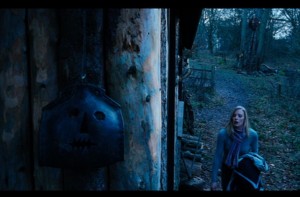 While others are less obvious (like the eyes hiding behind Sarah when she awakens from a nightmare in the cabin: 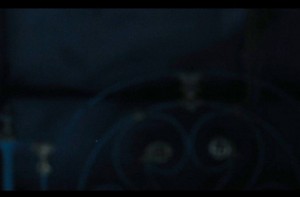 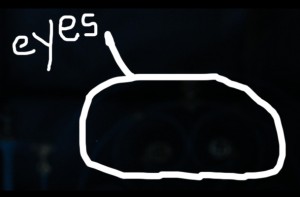 These shots bothered me to no end, because I couldn’t figure out what the faces represented. This last time watching it, I realized that it wasn’t about faces; it was about the eyes. The eyes represent a point of view, a way of explaining to the viewer through whose lens we’re watching the events unfold. I argue that, after Sarah goes insane, we (the audience) start seeing the events through two different points of views: Sarah’s and everyone else’s.

Every time we cut to shots of the crawlers attacking the other women in the group (Juno et al.), that’s Sarah’s warped vision of what’s going on–her mind’s coping mechanism for understanding what’s happened to her friends. Every time Sarah enters the shot, the viewpoint switches.

Don’t believe me? Look at the utter horror on Juno’s face when she sees Sarah for the first time since hearing her scream:

Throw in the fact that Sarah spends the last part of the film covered in blood, and the fact that we see Sarah kill Beth and Juno, and I feel like this “mystery crawlers” theory has some merit. Sure, we see the crawlers when she’s fighting with Juno, but, no damage is done to either woman. It’s the confrontation between those two women afterward that determines Juno’s fate.

Another reason that Sarah may have been killing people was because of her daughter. What? Yes. Her daughter.

What I noticed the most this time was the constant presence of the image of Sarah’s daughter. In the film, there are no fewer than four shots of Sarah’s daughter (after the girl has died) holding a birthday cake (they had spoken of her upcoming birthday in the car). She only appears when Sarah is unconscious, most of the time after falling and hitting her head. Specifically, these occur when Sarah is in the hospital, after Sarah is almost trapped in the tunnel, after she falls into the pit (before seeing Holly), and at the end of the film. There is also another spot after Holly breaks her leg where Sarah hears her daughter’s laughter and pursues the sound (this is the first time she sees a crawler)–not technically a sighting, but the daughter was involved.

In one intriguing shot (after Sarah runs away from the alleged crawler, falls down, and hits her head), she has another vision of her daughter. But, as you can see, her daughter literally transforms into a crawler:

Assuming the daughter is a representation of Sarah’s psyche, this might be a marker for when her mind split.

Now, the other times we see the daughter, young Jessica is blowing out the candles on a birthday cake. Here is a screen shot of the cake flashback: 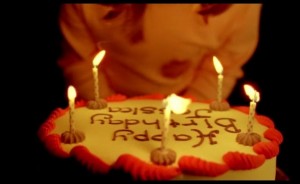 Notice the five candles? How about the five friends? This film is far too good for that to be a coincidence. Especially given the last shot. Prepare to have your mind blown.

And here is a shot of the cake that appears at the end of the film. Notice anything different?

So what’s the significance? For me, I think it goes back to the basics. Before you blow out your birthday candles, you make a wish. I think that, in Sarah’s mind, her daughter (Jessie) was wishing to be reunited with her mom. In order for that to come true, the candles all had to be blown out. There were five candles, and each represented one of her friends. One by one, Sarah snuffed out those candles by killing her friends. In the last shot, there were six candles. As Sarah sits across from the image of her daughter, you can hear the crawlers screeching in the background. The sixth candle is Sarah (evidenced by the fact that she is the only one carrying around a torch), and she’s about to kill herself to finally be with her daughter.

We assume these shots are interrupting the film. Could it be that, as far as Sarah is concerned, the movie is interrupting these shots? She needs to get rid of her friends in order to be with her daughter. This would suggest that her friends were either killed off in her mind or that Sarah literally killed them all in the cave.