This should speak volumes about my relationship with Claire: we watched The DescentÂ together this weekend. BAM!

As we all know, The Descent holds a special place in my heart. That was the weekend we were in Bloomington, IN, visiting Nate for Snakes on a Plane. Well, not all of us were there but, despite missing the fourth, we had a blast playing catch, grilling out, playing a marathon game of Mille Bornes, and watching one of the best horror movies ever made.

The movie is incredible. Seriously. Just incredible. The only man in the entire film (except for Scar) is impaled and killed three minutes in. The entire movie is 95 minutes long, but the crawlers don’t appear for 47 minutes. Juno’s affair with Sarah’s husband is telegraphed in three looks, each less than two seconds: Juno to Paul, Beth to Juno, and Paul, Juno and Paul again. It’s mercilessly graphic without being grotesque, gritty without being disgusting, and poignant without being cliche. It is completely, relentlessly compelling, from start to finish.

Interpretting films is a large part of my field. Bordwell & Thompson argue that there are four levels of interpretation, with the fourth (symptomatic) being the most complex, representing a manifestation of a culture’s ideology. In other words, a movie often represents a lot more than a literal translation of what is on the screen.

So, how to interpret The Descent? There are so many questions. Most notably, what’s with the faces, the eyes keeping a silent watch on the characters in the film (and, at times, the viewer). Here’s a picture of a face when Sarah enters the cabin: 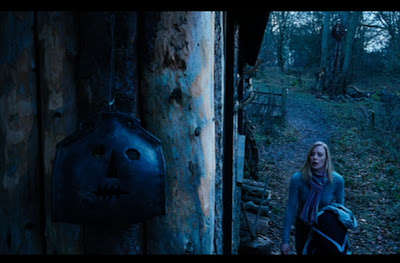 And here’s another, a little more subtle. This one happens after Sarah has a disturbing nightmare and sits up abruptly in her bed in the cabin. After she lays down, this is visible (even more so in dark lighting): 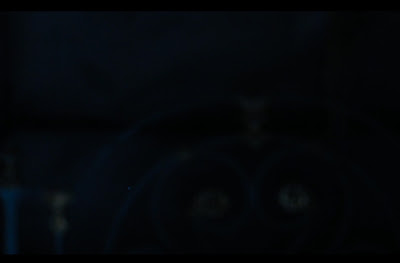 These eyes are disturbing and (I would argue) deliberate on the part of the director. My friend Jared has also pointed out a face-type shape in the bullet holes on a road sign. What are they supposed to mean? Furthermore, what about the crawlers? Peter Travers of Rolling Stone openly wonders “Are they inbred mutants or the longtime grudges among the women made creepy flesh?” This point is made all the more salient by the fact that the crawlers have no vision and can only kill based on sound–fascinating in a group of friends where each has issues with the other (the affair, guilt of lying about the affair, the sister rivalry, a hidden lesbian crush) but are left unspoken.

Clearly, there’s something more than just spelunking going on here. This becomes all too clear with the theatrical ending (Juno in the car) and the dvd-release ending (Sarah with her daughter in the cave). Well, I stumbled on a review (and some miscellaneous comments) that had some interesting suggestions:

• Sarah’s friends each represent a part of her psyche

• Sarah never regained consciousness after falling into the hole (when she was knocked out) and therefore hallucinated about all of her friends being killed. This means she woke up at the end, mentally unbalanced, and settled in to eat cake with the image of her daughter (possibly dead, possibly just giving up in order to die).

The most intriguing is the idea that the crawlers never existed. The reviewer suggested that Sarah murdered all of her friends in the cave, which would explain why she was covered in blood. The reviewer asked us to see her like we would see the lead in Carrie, an outcast pushed too far. While initially I was against this idea (hardcore against it, actually), it’s a lot of fun and has some merit. For instance, Sarah wasn’t around when the other friends were killed–she was only physically around for Beth and Juno, both of whom she was responsible for killing. Furthermore, Sarah is not hurt by the monsters and actually begins crawling around silently like one (as evidenced when she temporarily rescues Juno).

I don’t know if I completely buy any of these, and I certainly dismiss one or two. However, by taking bits and pieces of what we know, we can assemble our own take on what really happened. Ultimately, it’s what we think that truly matters. As one reviewer wrote: “That’s what makes these kind of films so much fun. They may mean nothing at all (as unlikely as that is in this case), but they so carefully lay the groundwork to believe the exact opposite, that we’re fools not to give it a go.”