Lubbock has long had problem with stray animals. It’s not an issue that’s confined to West Texas, though I would argue the cowboy mentality of refusing to spay/neuter pets certainly doesn’t help anything. Anyway, it’s a problem. A few of my students have done news stories on the city animal shelter, and found that between 3000 and 5000 animals are put down every year in Lubbock. Absolutely tragic.

As I’ve mentioned before, Claire and I are a sucker for helping animals. Well, we recently had two more opportunities. This is the first.

A while back, we were driving to pick up supper when we saw a large black lab trotting across 50th and Indiana, an extremely busy intersection here in Lubbock. He was happily oblivious, but Claire and I were concerned. After an extremely brief discussion, we opened up the back seat and Tug hopped in. Honestly, when we first saw him, we thought he had simply gotten out from a nearby neighborhood – he was very friendly and had a very nice collar.

*NOTE* Obviously we can’t keep the strays we find, but they have to be called something. So, we come up with names for animals that we would never use. Tug  eventually came from the fact that we thought he would like tug-of-war (which he didn’t, but whatever). Heck, there was an orange cat with a striped tail that would have made a perfect Hobbes, but we wanted to save that name for later (if needed). Hence, we called him “Stripey McPeppermint.”

We didn’t see anyone who looked like they were searching for a dog, and so we put him in our backyard and brought home supper (and dog food). We were able to open up the door to the sunroom, so he could go in or out, and we made it a comfortable area.

In the meantime, Claire scoured Craigslist (and posted an ad of our own). However, after days of looking, nothing showed up. Finally, Claire went back through the ads and discovered a “Found” ad that matched Tug’s description from a few weeks earlier. Unfortunately, the people who wrote the ad never found the owners, and they finally just let Tug go. Nice people.

Now, I should take a minute to demonstrate just how awesome Tug was. Here are a couple pictures of him: 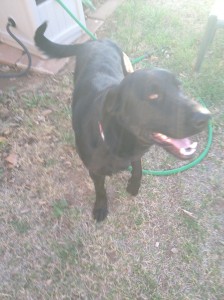 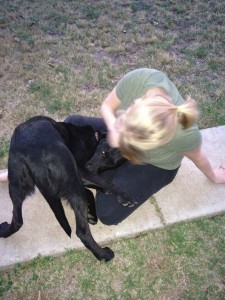 As you can see from the last photo, Tug loved trying to curl up on your lap. Here is video to prove it:

I was in panic mode, as we’re not allowed to keep a dog in our rental house and, with our cats and our schedules, it wasn’t even an option if we were given permission. I called a ton of no-kill shelters, willing to drive pretty much anywhere in West Texas to make sure Tug wasn’t put down. The responses were not good:

As you can see, there wasn’t any room.

At this point, we were freaking out, and Claire put up a Craigslist ad stating that there was a chance we would have to give him to a shelter (though I was already crunching numbers on how to drive him north, throw him in my parents’ house, and run like crazy). Thankfully, at the last minute, someone wanted to meet Tug at the park.

Long story short cliche, we showed up, Tug behaved wonderfully, and once again, we handed over a leash to a very nice person (and his girlfriend–they already had a small dog together that Tug loved) and our puppy walked away. Definitely sad to see him go, but glad that he was off the streets in a good home. I hope he’s insanely happy, and that the only thing he has to stress about is whose lap to sit on.