Tonight, we had to say goodbye to a furry friend. Elvis was 17 years old when the vet came to see her one last time; 30 seconds later, she was gone.

Elvis was a tiny kitten Claire’s dad, Dave, found at a fertilizer plant. Elvis wasn’t afraid of him (or anyone else), and Dave brought the kitten home, fearing it would accidentally ingest chemicals or suffer some other cruel fate. They thought it was a boy, named “him” Elvis, and found out later that it was actually a girl. Despite the inevitable confusion from veterinarians for years to come, the name stayed.

Her life was filled with happiness. She used to dangle in a branch above the bird bath, lurking and waiting. When Dave went into the hospital, Elvis’s soft coat patiently absorbed every last one of Claire’s tears–she always knew when her mom needed comforting. For me, I’ll remember Elvis’s quiet meow and understanding eyes. I’ll remember her laying in the grass while we drank morning coffee in Lubbock, absorbing the sun and surveying the yard, waiting patiently to escape over the fence on another adventure. I’ll remember her racing around like a kitten even though she was 17 years old, batting around a ping-pong ball or chasing after the snake wand.

But for me, my favorite memory of Elvis will be her stubbornness. She laid down when she wanted to, she reminded you when it was time for canned food, and she let you know that it was her pillow, god dammit. She would glare at Claire when it was time for bed, she refused to relax on the 22-hour road trip from Ohio to Texas until she felt safe, and she swatted any cat that got in her way as she gingerly walked down the hall.

It’s my favorite memory because she used her stubbornness to get what she wanted. She laid down when she wanted to because she wanted to figure out how to be exactly between Claire and me. It was time for canned food because she liked being special, a daily reminder that no matter how many others showed up, she was still the favorite. She wanted her pillow because she could lay against Claire’s cheek. It was bedtime because she wanted to cuddle, she whined on road trips until she got to sit in her mom’s lap, and she didn’t tolerate other animals in her way because she had a path mapped out that would get her from point A to affection in the least amount of time.

She was stubborn because all she wanted was love, and her life was absolutely filled with it. From the moment she woke up to the moment she fell asleep, she was nearby, either in somebody’s thoughts or someone’s arms.

There’s a poem called the rainbow bridge that still makes me tear up every time I read it–collateral damage from my cat, Zeus:

Just this side of heaven is a place called Rainbow Bridge.

When an animal dies that has been especially close to someone here, that pet goes to Rainbow Bridge. There are meadows and hills for all of our special friends so they can run and play together. There is plenty of food, water and sunshine, and our friends are warm and comfortable.

All the animals who had been ill and old are restored to health and vigor. Those who were hurt or maimed are made whole and strong again, just as we remember them in our dreams of days and times gone by. The animals are happy and content, except for one small thing; they each miss someone very special to them, who had to be left behind.

They all run and play together, but the day comes when one suddenly stops and looks into the distance. Her bright eyes are intent. Her eager body quivers. Suddenly she begins to run from the group, flying over the green grass, her legs carrying her faster and faster.

You have been spotted, and when you and your special friend finally meet, you cling together in joyous reunion, never to be parted again. The happy kisses rain upon your face; your hands again caress the beloved head, and you look once more into the trusting eyes of your pet, so long gone from your life but never absent from your heart.

Then you cross Rainbow Bridge together…

We now have one more furry friend waiting at the Rainbow Bridge, though she’s content to lounge in the sunshine instead of playing with others. But as soon as we approach, she’ll make a beeline toward us, her calculated steps uninterrupted and her glare keeping everyone out of her path. Determined, she will trot toward us, and she’ll start purring before we even pick her up, anticipating that happiness she so stubbornly desires and deserves.

Until that day in the brightly-colored sun, we can take solace knowing that a tiny kitten hiding among the chemicals ended up traveling across the United States…and she got to do it all from the safety of her mother’s arms.  She saw everything while experiencing only joy–we should all be so lucky.

Only the sweetest dreams, Elvis. We miss you already. 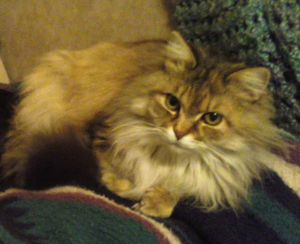