They say that comedy is tragedy plus time, which is why Lincoln being assassinated is funny – just ask Alan Alda or Michael Scott. But that time can also embolden other aspects of human nature as well.

Tributes are a difficult thing to judge. Visually-speaking, these types of artistic creations are an eyesore: 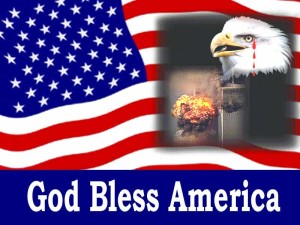 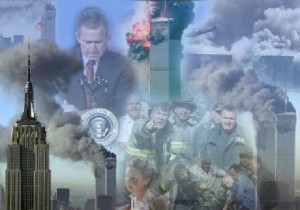 That said, it’s harder to argue kitsch when sincerity is involved. The eagle blood tears might look hideous, and someone clearly learned about opacity in Photoshop, but if it was truly done in the spirit of honoring victims, heroes, and/or survivors from that day, then the genuine effort dulls its offensiveness.

I would argue the one factor that can firmly establish tribute from opportunism is money. It’s what separates true artists from assholes like this. And when corporations start weighing in with tributes…well…motive rears its ugly head – emphasis on ugly. 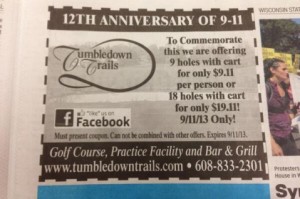 The further we get from the 9/11 attacks, the more emboldened businesses (AND BRANDS) become. This year was no different, except that Mike Monteiro used his Twitter account to  compile them.

As a bonus, enough people on Twitter noticed the trend and started the fantastic hashtag, #PromotedMourning.

I’ve compiled the best into a Storify piece. Please enjoy: