As you know by now, I have an absolute love for monster movies. I used to hit up the now-defunct “Saturday Movie Matinee” video store at the Richland Mall in the bustling megalopolis of Mansfield, Ohio, and I would stare at shelf after shelf of classic (and not-so-classic) monster movies. With limited funds, I would pore over each box, making the tough decision between Island of Terror and The Land Unknown or Invasion of the Body Snatchers (colorized!) and It Came From Outer Space. It was fantastic.

Yet, every once in a while, I would strike gold somewhere else, normally in some discount bin at Meijer. My prize finds were UHF (granted, not a monster movie, but still a classic) and One Million Years B.C. (not to be confused with One Million B.C., starring Victor Mature), and I always kept my eyes open. On one such adventure, my eyes caught an intriguing movie box, featuring scantily-clad women in futuristic costumes fighting a gigantic Tyrannosaurus Rex. Check it: 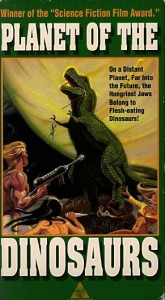 Not as scandalous as the overseas version, but honestly the idea of people fighting dinosaurs was enough for me. Plenty of dinosaur monster movies exist, but for every One Million Years B.C., there are plenty of craptastic ones (Dinosaurus, King Dinosaur, Lost Continent, People That Time Forgot, The Lost World…). I had high hopes about Planet of Dinosaurs, and to be honest, they were met..eventually.

And yet, despite its ineptitude, I kept coming back to watch it again and again. Hell, I still own the original vhs I purchased forever ago, the dvd that was released, and even the 30th anniversary dvd (though, through some sort of error, the dvd cover reads “20th anniversary edition“). There is just something about this movie, and if you’re a fan of campy adventure, I think you’ll feel the same way.

Let’s start with the effects. They’re actually pretty great. Check out these dinosaurs: 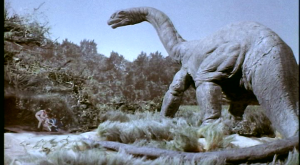 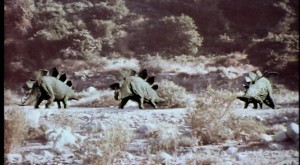 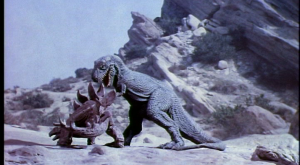 And speaking of effects, don’t forget that Planet of Dinosaurs has one of the greatest death scenes of all time:

Now, almost at the opposite end of the spectrum is the acting. Some people have blamed the script, but when you watch the movie…well…it’s pretty obvious. Sure, the plot is borderline cliche, but so are 90 percent of all monster movies. It’s a traditional storyline: Group is stranded, characters suffer suspicions/doubts about one another, the group bands together against a common foe, and ultimately the characters achieve harmony with themselves and their new environment. And, for me, that traditional storyline works, especially when you consider that the group is stranded on a planet of fucking dinosaurs! BAM!

Seriously though, the acting is rough, but the intent is there. Listening to the commentary track (yes, I am that fond of this movie), you hear about this group of people who just wanted to make a movie and, by goodness, they did. Only one of them was a trained actor (and he hams it up something fierce), they acknowledge all of their mistakes, but again the intent was there.

At the end of the day, I think it comes down to the fact that I have weaknesses for dinosaurs and for adventure movies. Quick, name five great dramas. Easy, yeah? Five great comedies? No worries. Five great science fiction films? Please. But five great adventure films? Tricky. And I’m not talking about action/adventure, I mean true adventure, 1950s serial-type adventure. You have Raiders of the Lost Ark (which I have talked about before) at the top, a few decent contributions (e.g., Romancing the Stone, Tarzan) and a bunch of crap. Planet of Dinosaurs swung for the fences. It was a pop-up to center field, but the exhilaration was there. And dammit, at least they tried.