So last week the season final of The Walking Dead aired and, in typical Walking Dead fashion, it was filled with potential but never really delivered. Clearly, there are some obvious solutions that would enhance any episode, such as killing Carl, killing Lori, killing Carl again… 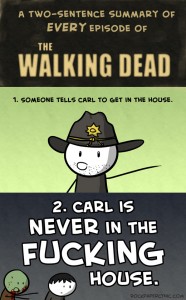 But let’s focus on the specifics. I’m going to fix the episode in two simple steps and lay the groundwork for the next season…while not killing anyone. For reals. Obviously, this is about the season finale, and so if you haven’t seen that episode, here there be spoilers. Also, while I’m looking forward to reading the comic books, I haven’t gotten The Walking Dead Compendium yet, so don’t look for any overlap. Let’s do this.

One of the main problems of the series is that we don’t know much about any of the characters (and care even less). I’m reminded of Plinkett’s epic reviews of the Star Wars prequels, where he asks fans to describe classic Star Wars characters without referring to their occupations or physical appearances. After describing Han Solo and C-3PO, Plinkett asks these same people to describe Qui-Gon Jinn and Padme Amidala. Not surprisingly, the fans with tons to say about Han and C-3PO were at a loss for words with the prequel characters.

Unfortunately, most of the characters we can identify don’t fare much better (describe Lori without using the terms “nag” or “shrill”). Why is this? Well, it’s simple: We don’t know anything about them. One of the best shows ever in terms of character development is LOST. Each week, we spent an episode getting an in-depth look at one character (“This is going to be a Sawyer episode”). Initially, this was so we (the audience) could see how the characters behaved before the crash, which informed the decisions they made on the island.

Eventually, the character flashbacks were less about plot and more because we cared about them. Dead tried this in the “Bloodletting” episode, where Lori had to tell Carl that Rick had been shot (and it gave Carl a chance to chew the scenery), but it was thankfully not attempted again, as it didn’t inform the characters or plot in any way. Overall, we’re expected to pick up character traits and flaws from arguments or half-baked philosophizing about the end of the world. Character development cannot be fixed in a single episode, but the season finale had serious potential. After a rousing display of nighttime gun battles and confusion, it seemed like the finale was off and running…literally.

In all the chaos, the farm posse gets separated into five groups: 1) Hershel, Rick, and *sigh* Carl 2) T-Dog, “Lori,” and Maggie’s sister (remember when we totally thought she committed suicide but she didn’t? Powerful stuff.) 3) Glenn ‘n’ Maggie 4) Andrea (a.k.a.: the real Lori) 5) Darryl and Carol In what is only slightly more likely than actual walking dead, everyone meets up back at the highway, even though this was never designated as the official fallback area and even though everyone seemed to drive for hours in opposite directions. Only Andrea didn’t show and, because they thought she might be dead, five minutes after everyone rolled in, they rolled back out. On the road again.

So what about this? The group gets separated…and stays separated. T-Dog heads for the coast (Lori optional), Glenn and Mags find some isolated shack and discuss whether they want to rejoin anyone, Rick and Hershel swap monologues, Daryl and Carol form some sort of elite walker-assassination unit, and Andrea just hangs out being awesome. Honestly, it doesn’t matter what they do. This would give us a chance to actually get some quality time with these characters and figure out what makes them behave the way they do. It would set up the entire third season as the group slowly joins back up, only this time they understand one another better (maybe even forming some unlikely alliances)…and so do we.

This one is more for me, and honestly I wouldn’t have thought of it if not for a user named Mentat on Fark. I had completely forgotten about it. I’m going to quote at length, as it was an excellent point:

“…My one major beef with this season is that the zombies have become the stereotypical generic shamblers. In the first season, the walkers were more tragic figures. Even though they were dangerous, they were once people just like the survivors and a great effort was made to present them in a softer light.

– Bicycle Girl, pathetically crawling through the grass to god knows where. Rick’s first task once he’s recalibrated, is to extend an act of mercy to this person he doesn’t even know. As she reaches out to him, you’re left to wonder if she’s trying to grab him or begging him to put her down.

– Before chopping up the Alley Zombie and smearing his guts on the survivors, Rick takes a moment to go through the man’s wallet. Wayne Dunlap, Georgia licence. Born 1979. He had $28 in his pocket when he died. And a picture of a pretty girl. It was a nice message to the audience as well as the survivors.

– The little girl zombie, picking up the teddy bear, given Rick one moment of hope that someone survived. – Morgan’s wife also seemed to retain some degree of her humanity. Somewhere deep down inside, she recognized the house and knew there was something in there that she wanted. The scene of her trying the doorknob and looking through the eyehole was haunting and I’m glad it was Rick at the door and not Morgan.

– With Amy, they avoided the “I’m a walker now and I kill you” cliche. Amy’s slow return amplified the tension, but it was the way she came back that worked for me. Instead of just lunging for Andrea, Amy reached up and seemed to caress her hair. You were left with the impression that she might have been trying to communicate with Andrea instead of killing her. They tried that sort of thing on occasion in Season 2. Sophia obviously, and Beth’s mom, though that was ruined by the cliched “Ha! I’m not really dead!” thing.

The zombies this season became the typical generic targets for the sharpshooting survivors who a week before couldn’t hit a swinging tree branch. Minor complaint, I know, but I think that trait they showed in the first season was what set TWD apart from other zombie takes we’ve seen.”

I remember the scene when that zombie woman cyclist (who I don’t think had legs) had pulled herself through the woods and fields into the middle of nowhere. Remember her? 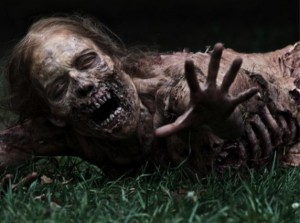 In the words of Ted Mosby, that scene was hauntingly beautiful. This woman was a disgusting sight, and yet we felt sympathy for her. She was clearly trying to get somewhere, but wasn’t hunting anyone or anything. She was wildly determined, and even at the end you weren’t sure if she was overcome by walker instinct or if she was pleading for Rick to end it all.

I would have loved it if one of the zombies had shown some sort of humanity (maybe not during the attack on the farm, but a lone straggler later on). Even a brief moment would have made a substantial difference, and again set the scene for the third season. And yes, Walking Dead writers, I am available for freelance work.