Even though flatscreen TVs have made entertainment centers all but irrelevant, many of us still want items around the TV. Maybe it’s because we want to advertise who we are, maybe it’s so the TV just doesn’t sit alone in some sort of living room limbo. Hell, maybe we just don’t want to walk to the other room every time we want to grab a dvd.

For Claire and me, it’s a minimalist approach with a low TV stand and wall shelves surrounding it (thank you IKEA!). We engaged in a lively debate about what would go on the shelves, which mostly went like this:

ME: How about we put some of my dinosaurs on the shelf!?

Good times! But Claire knows of my love for movies, and so I was put in charge of figuring out what movies to display. I don’t want to exaggerate, but this might be literally the most important task I’ve ever done in my life.

I don’t know the exact number of dvds I have, but I have two large dvd racks (one for monster movies, the other for the rest) that still can’t hold all of my movies. You might be in the same situation. Obviously, you can’t put them all on display in the living room (believe me, I asked), so how do you decide what to display? How did I come up with this incredible display? 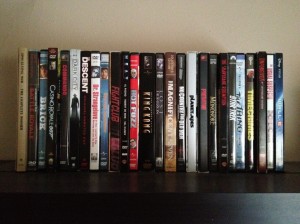 Follow these tips, and you’ll have people staring at your dvd collection throughout the fancy dinner party/murder mystery/first date.

Your movie collection says more about you than anything else (at least to other movie lovers). Therefore, you must include some movies that absolutely need to be included. For me, I knew I couldn’t have my movies on display without including King Kong (the extended edition which includes the swamp scene) and The Descent (which I write about from time to time).

2. The more genres, the better

No one wants to saunter up to your movie collection to be greeted by a single genre (at least not for your main display). It kills the conversation, eliminates intrigue, and pegs you as a one-trick pony, someone who has a sophisticated action-adventure palette but is lost when it comes to drama. I have everything from sci-fi (Dark City, Planet of the Apes, Star Trek) to westerns (The Magnificent Seven, Unforgiven) to drama (The Usual Suspects, Heat, No Country for Old Men) to comedy (Hot Fuzz). Throw some variety in your grouping. And, as a bonus piece of advice, make sure you mix up the actors/actresses as well. Brad Pitt is fantastic, but we don’t need to celebrate the man’s entire collection.

3. Stay away from series

We get it, you like Lord of the Rings, Indiana Jones (not including the fourth one), and Star Wars (not including the prequels or the Ewoks). So does most everyone else. So why are you wasting our time? Most of the movie series you would want to buy are widely acknowledged as popular, great films, so there’s no need to state the obvious. Plus, space is at a premium, and the bulky packaging of these movie sets (with their booklets and extra dvds) isn’t helping you. If the original theatrical release of the original Star Wars trilogy is ever released in high def, I might make an exception.

You might want to try and hint at a series, but only if the film can stand alone. As you can see, I include Casino Royale because it shows that I am an avid James Bond fan, but also because you don’t have to watch every film before it to understand what is happening. It transcends the series, whereas other films (Lord of the Rings, Star Wars, and Godfather trilogies) are pretty reliant on the others.

4. Limit the number of foreign films

Yes, you’re very refined and cultured. But part of the reason you’re displaying movies is to connect with visitors, and if all you have is obscure Czechoslovakian films, then the conversation stops cold (and the eye-rolling probably gets revved up). Limit yourself to one or two (maybe even three or four, though that’s pushing it) to sprinkle into your collection. For me, it’s Battle Royale and TimeCrimes (Princess Mononoke is also on there, but it’s voiced by American actors, so it could go either way). The more appealing, the better. Royale is a fantastic movie (as evidenced by this clip), but not as mainstream, and so it’s something to talk about. If you’ve put your collection together correctly, when people see a movie title they don’t recognize, they’ll ask you about it (because they’ve agreed with your other films–otherwise why are they inside your house?).

This is your living room, not the Disney vault (no Song of the South release date Walt?). Like the foreign films, throw in one or two, and then move on. Along with Princess Mononoke, I also threw in WALL-E (I defy you to find a children’s film with imagery as powerful as the first 10 minutes of that movie…and no, the heartbreaking montage from Up doesn’t count). For me, if I put Aladdin up there, I’d have to put The Little Mermaid up there, along with Beauty and the Beast, Lion King…

You can’t find someone who is going to agree with every movie you love. Hell, even my buddy Jared (pictured here) and I only had 99% agreement when Netflix still allowed friends (granted, that was with 3000+ movies, but it still was not 100%). So you need to take some risks. No one’s going to get to upset with The Shawshank Redemption or Eternal Sunshine of the Spotless Mind, but Brick, The Thing, and Lost Horizon probably turned a few heads.

7. Trade them out every once in a while

Hopefully your movie collection is evolving, maybe you even have a few movies that didn’t make the cut that you feel sorry for, or it might just be that you want to change things up. Get a rotation going and just trade out a few movies every once in a while. Next up on my roster is Iron Giant, The Lookout, Oldboy, and probably Mackenna’s Gold. For me, it keeps me interested and makes sure the movie selection doesn’t become stale. Plus, if you have frequent guests, they might even notice that you replaced a few movies! You know, it’s never happened to me, but there’s still hope for you!

8. Allow yourself to be whimsical

At the end of the day, it’s your movie collection, and you’re allowed to include some left field picks. For instance, I included Commando. Is it because it’s one of the best movies I’ve ever seen? No, of course not. But it is the best worst movie I’ve ever seen, and I felt that it deserved to be on display. Just make sure it’s a bold pick that you can defend, and you’ll be the talk of the town.